GONNA BE THE TWIN TAIL WIKI

Gonna be the Twin Tail is a transgender themed wiki. Soji Mitsuka is a high school boy who has an overwhelming observational obsession for girls who wear their hair in twin tails. Monsters from another dimension have come to Earth to 'harvest' human spiritual powers. The monsters seek to remove teenage girls of their desire to wear twin tails. Soji transitions to become the female TailRed to fight the monsters. As the battle for the attribute power possessed by twin tail girls grinds on, two other ordinary girls, who also wear their hair in twin tails, are conscripted and given Tail Gear, to become TailBlue and TailYellow. Now with three Twin Tail Warriors, will the tide of battle turn in favor of the humans ?

The Wiki Media page can be found here.

Welcome to the " Gonna be the Twin Tail " Wiki

Gonna be the Twin-Tail!! (俺、ツインテールになります。 Ore, Tsuintēru ni Narimasu.?, I Will Become a Twintail.), also known as Ore, Twintail ni Narimasu. or in its short form OreTwi (俺ツイ?), is a Japanese light novel series written by Yume Mizusawa and illustrated by Ayumu Kasuga. Shogakukan has published twelve volumes under their Gagaga Bunko imprint since June 2012.

An anime adaptation produced by Production IMS began airing in Japan on October 9, 2014.

This Wiki is the English language version of the anime Gonna be the Twin Tail, taken from the light novel Ore, Tsuinteru ni Narimasu, and will feature primarily English words and phrases. This wiki will highlight and tell the story from the English dubbed version of the anime episodes. GONNA BE THE TWIN TAIL IS A TRANSGENDER THEMED WIKI WITH A MALE/FEMALE BIGENDER CHARACTER. When the Bigender Character ( + see below in Notices ) is presenting as a male, male pronouns will be used. When the Bigender Character goes through a Henshin [a transformation sequence], and is presenting as a young female, female pronouns will be used.

That being said, it is expected, and insisted, that everyone coming to this Transgender Themed Wiki must comply with the LGBTQIA+ Guidelines instituted by FAMDOM management, so as to be respectful of transgender characters, as well as transgender concepts presented in the manga and anime stories. 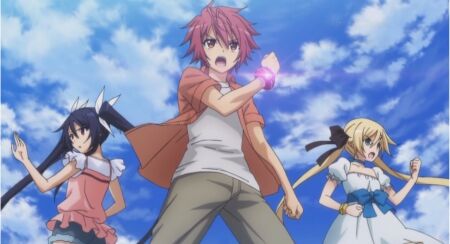 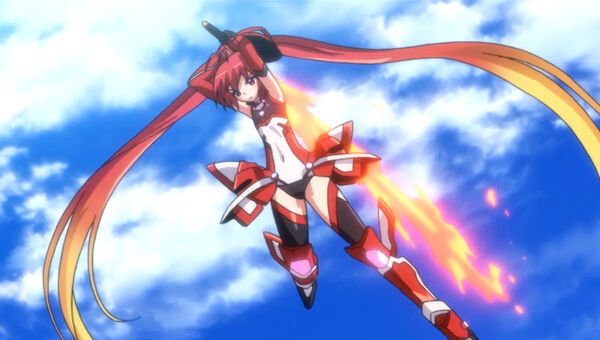 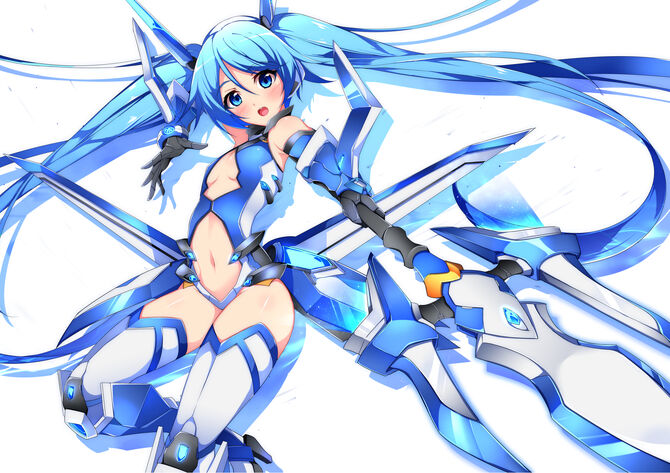 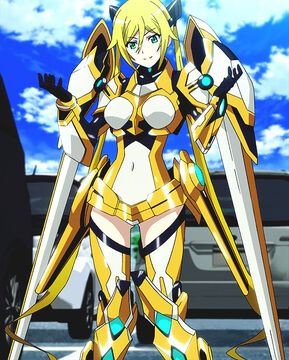 The teenage friends who become the Twin Tail Warriors.

Changes from male to female to become a Twin Tail

The Most Powerful of the Twin Tails

The Twin Tail that is an S&M and RPG fan.

An anime television series adaptation, produced by Production IMS and directed by Hiroyuki Kanbe, aired in Japan from October 9, 2014 to December 25, 2014. The opening theme is "Gimme! Revolution" (ギミー!レボリューション) by Maaya Uchida. The ending theme is "Twin-Tail Dreamer!" (ツインテール・ドリーマー!) sung by the voice actresses of the three main heroines: Tail Red (Sumire Uesaka), Tail Blue (Yūka Aisaka), and Tail Yellow (Chinatsu Akasaki). Both singles for the opening and ending themes were released on October 22, 2014. The anime has been licensed for streaming in North America by Funimation, and in the Middle East, North Africa, Europe (excluding UK and Scandinavia) by Crunchyroll and AnimeLab in Australia and New Zealand.

The Gonna be the Twin Tail Anime Trailer

Summary of the Entire Series

Gonna be the Twin Tail

Gonna be the Twin Tail Wiki is a transgender themed wiki, featuring a bigender main character.

One of the first anime action/adventure series to feature a main character that changes gender back and forth between a male and a female.
Soji Mitsuka is an ordinary high school boy who has an overwhelming obsession for girls who wear twintail hairstyles. He spends a good deal of his time at school observing all the girls who wear their hair in twin tails, and classifying them as to their hair color, length, and style. One day he encounters a mysterious young woman named Twoearle, who is from a parallel universe, and she informs him that there is an immediate danger to all inhabitants of Earth. Monsters from another dimension, called " Elemelians ", who have already invaded Twoearle's planet and have thoroughly trashed it, have now come to Earth to 'harvest' human spiritual powers. Teenage girls who wear their in twin tails have the highest angst power, so they declare that all Twin Tail Girls on Earth now belong to them, so as to strip them of their powers. These monsters feed off "attribute power", the spiritual energy that humans have.

Twoearle conscripts Soji to defend the Earth, and entrusts him with Tail Gear, defensive armor imbued with powerful twintail attributes and fighting abilities. But Tail Gear can only be used by young females who wear their hair in twintails. So to be able to use the armor, Sōji goes through a " Henshin " (Transformation Sequence), to change from a typical teenage male, into TailRed, a cute, adolescent female Twintail Warrior (ツインテイルズ関係者 tsuinteiruzu kankei-sha?), and is given the daunting task of protecting the people of Earth from the monster invaders. As TailRed confronts each monster, she finds that, for some unexplained reason, each monster has acquired a strong propensity for presenting different kinds of human fetishes socially, even though each of the monster's own particular fetish tends to be distracting to them when they are in battle. TailRed is hampered in battle, too, as she finds it difficult to acquire and control her new powers and weapons. As the battle for the attribute power possessed by twin tail girls grinds on, two other ordinary girls, who happen to wear their hair in twintails, are conscripted and given Tail Gear, and become TailBlue and TailYellow. Now with three Twin Tail Warriors, will the tide of battle turn in favor of the humans ? But another, even bigger, social battle begins. Can Soji, who as a guy, could only admire girls who had twintails, successfully 'transition' into a cute adolescent teenage girl, be able to actually wear their hair in twin tails, and become a successful female Twin Tail Girl Warrior themselves ?

All I have to say is: this is a GREAT comedy, take it as such, and it does a parody on every fricking anime genres out there. Seriously funny, take it as it is and have fun !

Krystal Robbins - a year ago

I love the twin tale story so much ! I think I watched it before, but I am watching it again. That is because I love it so much. :)

Ice Raid - a year ago

This is the best gender-swap boy to girl anime I've seen !

A guy who loves twin-tails must transform into a little girl with twin-tails to defeat aliens who want to rid the world of twin-tails. Pretty simple comedy.

rainy - a year ago

The Anime Summary: does not do this anime justice. The anime itself is very funny, cute, and a good story. Its a must watch !

To be fair the show is really cute and wacky, and can be stupid at times. Fans of the show simply don't care because those things were done so well that it made the anime fun to watch. Not every anime has to be serious to be good. This anime is a perfect example of a wacky but fun anime.

A Skilled Anime Critic's Review of Gonna be the Twin Tail

+ Bigender, bi-gender or dual gender is a gender identity that includes any two gender identities and behaviors. Some bigender individuals express two distinct personas, which may be feminine, masculine, agender, androgyne, or other gender identities; others find that they identify as two genders simultaneously. It is recognized by the American Psychological Association (APA) as a subset of the transgender group. Identifying as bigender is typically understood to mean that one identifies as both male and female or moves between a masculine gender expression and a feminine gender expression, with little or no middle ground, or both.

The Management Positions for the Gonna be the Twin Tail / Ore, Twi Wikia are all taken, and the editing manpower of this wikia is currently adequate. This wikia is a transgender themed wikia, and it would be best to be edited by transgender people, as they can personally identify with the main character, and tell their story with conviction, compassion, and with positive viewpoints of transgender issues. Nevertheless, the front page, anime episodes section, and the character profiles of this wiki have all been edited, double checked, have been proofread, and have come to reasonable completion. Further editing on these sections is not wanted, needed or necessary. However, if you still feel that it is supposedly necessary to edit on this wikia, you MUST observe these Wiki Usage Guidelines, found here.

Additional information about Gonna be the Twin Tail

Wikipedia: Gonna be the Twin Tail

Additional Transgender Male-to-Female Themed Wikis That You May Enjoy

If you liked this Wiki featuring a male to female bigender teenager as the Main Character, you may enjoy these other Wikis found on FANDOM, that have a male to female transgender theme. Click on the Wiki name to be taken to that Wiki's main page---

Until I Become Me Wiki

My Brother is Done For Wiki

There is a Library Wiki on FANDOM that has many short stories all with the same theme---A Main or Side Character who is a male to female transgender teenager or young adult. If that is your interest, then click on the title of the Wiki below to instantly teleport to this very special and encouraging Wiki. Also, say hello to the cute, pretty librarian, Noel Norwood, shown on the front (home) page. Yea, she used to be a guy!

Community content is available under CC-BY-SA unless otherwise noted.
Advertisement